Hi there! It’s been a while since I made an art blog entry, so I feel a bit rusty. I have had quite a year of life transitions and wonderful new changes, so I am glad to be working on some creative projects more freely again now that I have some free time to myself. It’s become more important to me to spend time with myself to maintain a good balance of my work-art life, as I attempt to cultivate my own rituals and practices for self-care.

That includes taking on tasks, new creative opportunities, etc. I have been practicing better boundaries with others on energy management, not just time. And so, I think with every step, the universe does listen. What once was a scary thought that I would be letting go of cool opportunities in front of me because I didn’t have enough time for it resulted in me making way for better opportunities when I had my priorities straight. Tsk. Had I known this sooner…

Anyway, I digress. I’m really here to give a glimpse into my latest art commission from a lovely friend of mine. She had the vision of recreating a reference painting of a ballerina in blue but making subtle changes to the image. I was very excited for the undertaking, especially since we were going BIG at 38″x52″! Canvas stretching is always a pain, but I’m lucky to have an amazing helper

The mood/feel of this painting is light, airy, and graceful. Per request, the subject matter was also made to look Asian. I was suddenly diving into what I didn’t know was a rabbit hole, when I began searching for asian ballerinas on the web. There weren’t many prominent ones identified, and I was stumped. I eventually landed on Stella Abrera, a world-renowned Filipino-American ballerina. 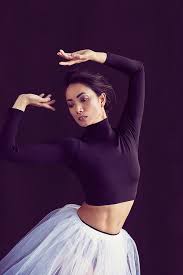 Watching some of her performances on video evoked feelings of cultural pride and joy. I was reminded that gracefulness doesn’t necessarily mean frailty. That it could embody strength, dedication, and rigor. Her devotion to ballet and reaching for her goals is impressive, and going against a cultural norm of expectations from her family background reminds me of the trailblazers that walk amongst us who are always creating new paths where it was previously deemed impossible. And how fitting, that it was recently Filipino American History Month in October, and lots of stories about the Fil-Am diaspora have been in the media. I also recently attended a life-changing event called Entrepinays Summit in San Francisco, California. I cannot completely put into words how the experience made me feel, but I linger upon the word “seen.” I felt home. I felt regarded and in the support of other Pinays just like me who are making their own career moves and forging new paths in the entrepreneurial field. I never realized that there were so many women just like me, had big dreams like me, and had strength that reminded me of women who raised me.

I slowly realized that this painting was quite an important and special one, and I took to task and got started. The immediate feeling of layering the first color of blue was such a calming effect. I felt engulfed and hugged by the colorful waves. It felt good. I began thinking about how to create a close anatomical representation of the ballerina, and it got me a bit frustrated at first. I became a little stuck with the idea of perfection, making it just right and as close to the reference as I could. But this got me nowhere and annoyed. I had to take some time away and pull back from the work, re-examine my motivations. After some time of thinking, I came to realize that it wasn’t my goal to create a “perfect” ballerina painting, I wanted to create a painting of a ballerina that embodied those same things I said earlier–gracefulness and strength.This was such a freeing moment, I learned. I began to paint more loosely and with ease. I was enjoying painting again. I’m putting the finishing touches to this piece as we speak. Overall, I’m quite happy with the work and learned a little bit more about my process. What works for me, and what are some things to check in with whenever I feel stuck during my painting process. Art has been such a journey for me. I look back at some of my previous works in the past two, three, four years, and I can definitely say that I’ve grown into my own style. I can only hope to continue evolving.